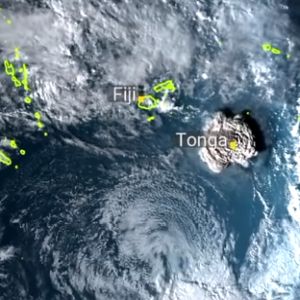 A massive volcanic eruption in the 21st century
Hunga Tonga Volcanic eruption was one of the most powerful explosions of the 21st century. On 14 January 2022, a very large eruption began on Hunga Tonga–Hunga Haʻapai, an uninhabited volcanic island and submarine volcano of the Tongan archipelago in the southern Pacific Ocean. The eruption reached a powerful climax the next day, 15 January. Hunga Tonga is 65 km (40 mi) north of Tongatapu, the country’s main island, The tremendous shockwaves caused by the eruption of Hunga-Tonga-Hungapai in Tonga were also felt across India, according to the Indian Meteorological Department.