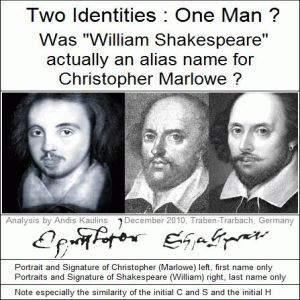 There are a lot of controversies about the authenticity of Shakespeare’s authorship.
It is contended that Shakespeare collobarated with many other playwrights, the most notable name being Christopher Marlowe. Apparently, it is said that the credit of Shakespeare’s ‘Henry’ series is largely owed to Marlowe.
Even though Marlowe is believed to have died at a tender age of 29 , some Marlovian theorists claim that Marlowe faked his death and continued producing plays whose credit was given to a frontman who is none other than William Shakespeare himself.