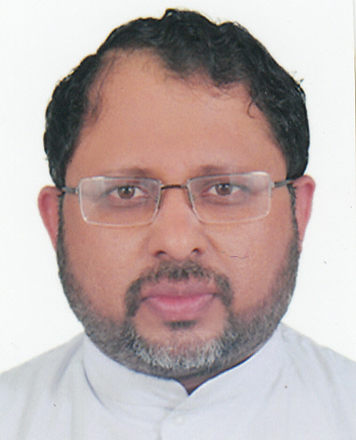 Fr. Koshy Chirakkarottu, the Bursar and Local Manager of Sarvodaya Vidyalaya, maintains a semblance of extreme etiquette with an aura of camaraderie and diligence. He holds Bachelor’s degree in Philosophy and Theology. He has maintained a high standard of academic excellence and has secured the British English Language Certificate from ‘Lingua Franca International’. His sojourn in international realm shaped the culmination of his educational perspectives and experiences. He did his Introductory Psychology Course at the Macomb Community College, USA and secured Licentiate in Sacred Theology (STL) from the prestigious Pontifical University of St. Thomas Aquinas (Angelicum), Rome. The veteran has delivered his inimitable services as the Director of Religious Education (DRE) at St. Anne Elementary School in USA for a period of three years. His journey has witnessed unprecedented pastoral missions which includes rendering services in the TACOM-LCMC of the US army and availing himself as the Chancellor of the Major Archdiocese of Trivandrum.

Since his foray into Sarvodaya Vidyalaya, he has become an epitome of support and has carved out a conducive atmosphere of solidarity. A visionary of supreme insight and intuition, his endeavors are anchored on prospects that could yield manifold results. He motivates students to be the light and life of the world. All his ventures are directed towards progress and to mould the students with character, discipline and values. His path delineates the realization of his visions into reality and every coveted milestone that he embarks adds another plume to his crest.